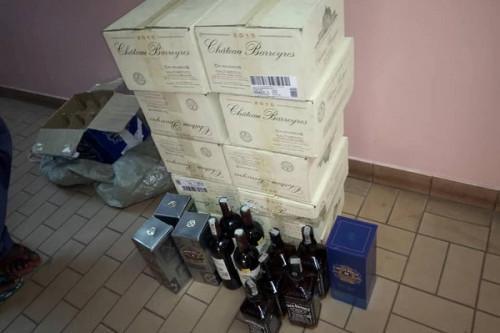 (Business in Cameroon) - In mid-February, fraud repression agency BNCRF conducted a lightning raid in Douala. During the raid, boxes of “Château Barreyres” branded wines of suspicious origin (photo) were seized. Part of those were presented to the media.

“It turns out that the wine in question did not come from the company BVS, which has exclusive distribution rights for this brand in Cameroon. The warehouses of this marketing area have been sealed for selling contraband products,” the BNCRF indicates.

In the framework of the raid, a network that distributes adulterated whiskeys was also discovered in the Bonamoussadi district. “The alleged trafficker was about to make a delivery of Chivas (12 and 18-year-old) and Jack Daniels whiskeys, stamped with fake labels, to a local snack bar. Following a denunciation by the manager of this establishment, BNCRF officers also seized these liquors, which represent a great danger to the health of consumers,” the repression agency says. An investigation was therefore opened in order to dismantle the entire manufacturing process of these various “deadly whiskeys.”

According to the Chamber of Commerce, Industry, Mines and Handicrafts (Ccima), smuggling, counterfeiting, and illicit trade activities in Cameroon cause losses estimated at XAF255 billion every year.