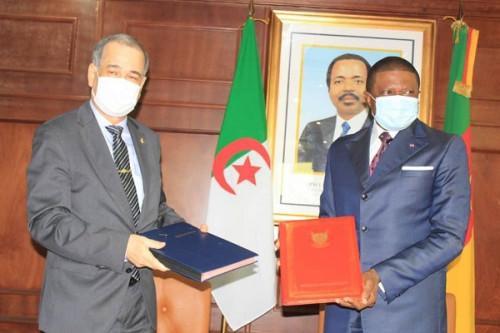 The agreement is aimed at promoting tourism and boosting commercial transactions between the two countries. It will also expedite the Algeria national airline’s (Air Algérie) project to enter Cameroon’s sky. Indeed, in 2019, Cameroon Civil Aviation Authority announced that Air Algérie was planning to start a route to Cameroon.

In that regard, Air Algeria duly submitted a request to the Committee in charge of approving the programs of scheduled international air services operated by airlines serving Cameroon, the national aviation authority explained.

Air Journal even provided additional details about the airline's deployment plan in Cameroon. According to the online news website, Air Algérie was planning to make a stopover in Douala, with three weekly flights from Algiers-Houari Boumediene airport, thanks to a Boeing 737-800 that can transport 48 passengers in "business" class and 114 in the "economic" class.

The arrival of Air Agérie into the Cameroonian sky will boost the interest Algerian economic operators have in Cameroon since 2018. Indeed, on December 5, 2018, in Algiers, an information day was organized to inform operators about the business, partnership, and export opportunities offered by Cameroon and Central African countries.

"In recent years, we visited numerous African countries to prospect the markets  [...] Algerian economic operators now have a clear idea of the needs in those markets and the competitiveness of Algerian companies compared with foreign companies already active in the market  […] Cameroon is an open door to the Economic and Monetary Community of Central Africa (CEMAC), which is an important economic community with 120 million consumers. This is a great opportunity for us," said Hocine Boubtina, secretary-general of the Algerian National Agency for the Promotion of Foreign Trade (ALGEX) at the time.