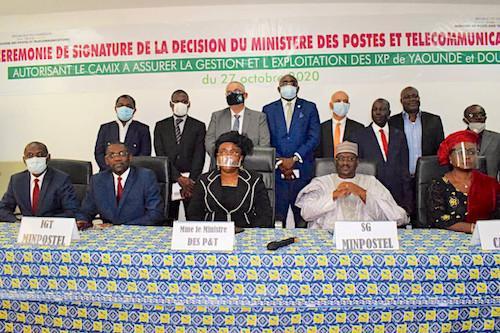 (Business in Cameroon) - On October 27, 2020, in Yaoundé, the executive committee of "Cameroon Internet Exchange Point" (CAMIX) and Minette Libom Li Likeng (Cameroon’s Minister of Posts and Telecommunications) signed an agreement authorizing CAMIX to manage and exploit the internet exchange points (IXPs) in Yaoundé and Douala.

According to CAMIX, the optimum functioning of IXPs (which are “physical infrastructure through which Internet service providers and content delivery networks exchange Internet traffic between their networks”) offers numerous advantages. These include the facilitation of local internet traffic exchange, cost savings, the improvement of internet quality and access (thanks to the optimization of the bandwidth’s latency), the provision of value-added internet services as well as boost internet use nationwide.

CAMIX also explains that Google’s edge network will soon be available in Douala and Yaoundé, allowing users to save dozens of gigabytes. It adds that the deployment of Netflix and Cloudflare will come next but, for “Amazon and Facebook, discussions are still underway.”